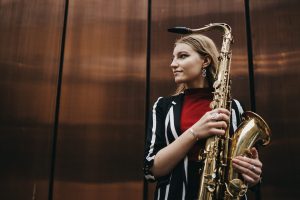 Emma Rawicz is an award winning young saxophonist and composer, already making waves on the UK music scene. She has been described as ‘a force to be reckoned with‘ (Jazzwise) and ‘a fast rising star‘ (London Jazz News). At the age of 19 she has already recorded her eagerly awaited debut album featuring SoundCellar favourite Ant Law, made up entirely of her original compositions, due to be released in May 2022.

She has also created a name for herself both as a bandleader and a ‘sideman’. A new arrival on the scene, she has already made an impact, regularly playing at major London jazz venues with a wide range of established musicians. Emma is a recipient of the 2021 Drake Yolanda Award.

Emma’s influences range from modern jazz and fusion to folk and soul, key figures in her musical development including Chris Potter, Ari Hoenig, Kenny Jarrett, Joe Henderson, Chick Corea and more.  Growing up in rural North Devon, Emma didn’t discover jazz until the age of 15, and didn’t pick up a tenor saxophone until a year later, but had spent her childhood otherwise immersed in largely folk and classical music.

Emma is a natural performer. Her music has a unique sound, fusing all her many influences, and her compositions range from lilting Afro Cuban inspired grooves to hard hitting modern jazz and funk numbers.

If proof was ever needed of just how highly regarded she is in the musical circles of the UK jazz scene, just one glance at the line-up of her band for this evening will immediately provide that ‘proof’!  All of them are extremely well known and recognised as fabulous musicians by our SoundCellar audience – in fact we are welcoming back only a couple of months since their most recent visit, the superb combination of Ivo Neame on piano and Conor Chaplin on bass, plus playing at The Avocet for us for the first time, previous frequent cellar visitors and amazing players David Preston on guitar and Asaf Sirkis on drums!  We could hardly hand-pick a better band if we had complete freedom to choose whoever we wanted!

We are certain you will agree this is an evening not to be missed, featuring an “awesome” band backing Emma, as one of the brightest stars on the UK scene, so it promises to be an amazing night.

This gig will be held at The Avocet (formerly The Cow), next to Parkstone Railway Station. Please note the 20:00 (8 pm) start time for the foreseeable future