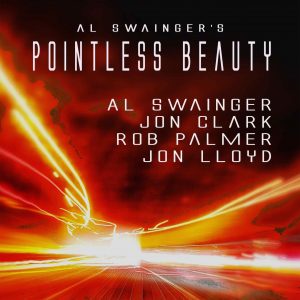 We are making this gig available as a livestream over Zoom for those who are unable to attend in person.

Growing up Al learned to play a variety of instruments (bass, piano, french horn, guitar), program computer sequencers, synths & fx pedals and developed a very wide taste in listening. As inspired by Weather Report as Iron Maiden, Pink Floyd, Radiohead or Chick Corea, it’s no surprise that Al’s authentic voice comes from some very eclectic places when it comes to expressing himself as performer and composer.

In the spirit of curating an ever evolving narrative experience, the project has no fixed membership. Drawing on players appropriate to the situation from recording to recording and gig to gig, keeps the output fresh and joyfully eclectic.

Jon Clark has been a regular collaborator since 2016, appearing on the Biophosmos : Music of Chick Corea album and upcoming Pointless Beauty – Hearts Full of Grace. He previously studied percussion in Cuba, also in India (with Shakti percussionist Neyveli Venkadesh) and at the Conservatorio Superior de Musica, Salamanca. He led ‘The Odd Little Group’ (a free improvised sax trio) and performed with ‘Dirty Pie’ (an ad lib hip hop ensemble), as well as working with the London Improvisers Orchestra, BeiBei Wang, Cleveland Watkiss and Orphy Robinson.

“Ambitious and virtuosic…Jon Lloyd is one of the most striking
writers at the sharp end of British jazz and improvisation” John Fordham, The Guardian