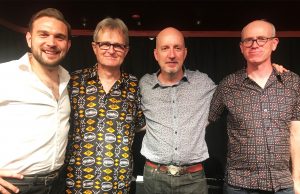 ATLANTICUS draws from the storied tradition of the great Hammond organ groups, with a post–modern sound echoing the ground–breaking organ quartet of Larry Young’s Unity album. The music is mostly original, spanning a stylistic spectrum from the hard bop blowout of the album’s title track ‘Blue Haven’, the modal explorations of ‘That’s What’, the odd–metered boogaloo of ‘Swank’, and the Afro–Cuban reimagining of the Bobby Timmons classic ‘Moanin’’.Peter and Terry were introduced through a mutual friend and first teamed up for a short UK tour in 2016, recruiting Brighton heavyweights trumpeter Jack Kendon and drummer Milo Fell to round out the lineup. From the very first gig, their immediate and natural musical rapport sealed the transatlantic bonds for what has now become ATLANTICUS. The band delivered exciting high–energy performances to delighted crowds, culminating in a head–turning performance at the Love Supreme festival. Building on that success, the quartet convened once again in the summer of 2018 for a 25–date, month–long tour of the southern UK, playing clubs and festivals from London to Wales.By the end of their 2018 tour, the band knew it was imperative to go in the studio and document their remarkable chemistry. The result is Blue Haven, featuring nine original compositions by Peter and Terry along with invigorating arrangements of two classic standards. The entire album was recorded in a single day, capturing all the vibe, excitement and groove of the group’s live performances that UK fans have known about since 2016. The band is looking forward to touring in support of the release of this dynamic new recording in the summer of 2022.