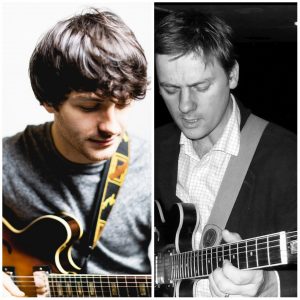 Two of SoundCellar’s absolute favourites together in one gig – now that’s not to be missed! We present Master guitarists (not an exaggeration) Mike Outram and Rob Luft in a very rare collaboration. Both having played for us earlier this year (Mike with his own trio and Rob with Alice Zawadzki), we are certain that SoundCellar regulars will instantly wish to attend and will recommend this gig to anyone else who enquires!

As if that’s not exciting enough, they also have a killer rhythm section of further SoundCellar ‘legends’ – bassist Joe Downard (Alex Hitchcock, NYJO) and drummer Corrie Dick (Laura Jurd’s Dinosaur, Rob Luft). Indeed they both have great solo albums themselves – Corrie’s ‘Impossible Things’ in particular, is one of SoundCellar John’s absolute favourites and excitingly there’s a new one from him on the horizon too!

Mike Outram has played many times at SoundCellar since his debut for us in 2011, featuring in different ensembles with amazing artists such as Roz Harding, Karen Street, Theo Travis, Pete Callard, Martin Speake, Tony Woods, and Paul & Jeremy Stacey. No matter who he has been playing with, his mastery of the guitar has always been a major talking point after the gig, by our discerning audiences!

‘The star of the show for my money is guitarist Mike Outram, whose blazing work sounds to me like a cross between Allan Holdsworth and Frank Zappa’
Brad Walseth, Jazz Chicago

Rob Luft is an award-winning 28-year-old jazz guitarist from London, whose virtuosity has been compared to that of six-string legends John McLaughlin, Al Di Meola & Paco De Lucia. He was the recipient of the 2016 Kenny Wheeler Prize from the Royal Academy of Music, and he also received the 2nd Prize in the 2016 Montreux Jazz Guitar Competition at Montreux Jazz Festival.

His debut album, “Riser”, was released on Edition Records in 2017 to widespread acclaim from the European jazz media. John Fordham wrote in The Guardian that it’s a “very sophisticated debut, but given Luft’s old-soul achievements since his early teens, we should have heard it coming”. Subsequently, on the back of the success of his first album, Rob was nominated for a string of awards – Breakthrough Act in the 2018 Jazz FM Awards, Instrumentalist of the Year in the 2020 Parliamentary Jazz Awards and Instrumentalist of the Year in the 2019 Jazz FM Awards. In May 2019, Rob was selected as a BBC New Generation Jazz Artist.

Rob’s eagerly-awaited second album, “Life is the Dancer”, was released in April 2020 on Edition Records to critical acclaim. Despite the intermittent global lockdowns of 2020, Rob made his debut appearance on the legendary German jazz label ECM Records with the album “Lost Ships, a collaborative effort with Swiss-Albanian singer Elina Duni, and this was nominated in the ‘International Album of the Year’ category in the 2021 German Jazz Prize.

Having also released a collaborative album with Dave O’Higgins and appeared as sideman on many other wonderful albums, Rob has recently recorded his third solo album, which will be released in 2023 on Edition Records.

“So young and so talented!”
Jamie Cullum, BBC R2