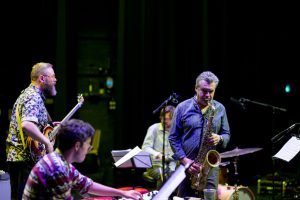 We are excited to present MARK LOCKHEART for his SoundCellar debut, when Mark brings his fabulous band ‘Dreamers’ here to Poole. This new all star group explores Mark’s multi-faceted outlook on music, through a new set of original compositions that can be heard on their 2022 album ‘Dreamers’. Urgent and exciting grooves and textures all cleverly crafted together within Lockheart’s unique and memorable melodies. Wide ranging influences from Ellington and Shorter to John Zorn, the Beatles and even Kraftwerk!

Mark Lockheart has been at the forefront of contemporary music since he first came to prominence with Loose Tubes in the mid-1980s. Since then he has become a ‘go to’ for many of today’s top artists, across many genres, not least as a member of Polar Bear, as a featured soloist for acclaimed composer Mark Anthony Turnage, as a member of The Printmakers and providing wonderful colour to recent albums by Slowly Rolling Camera (one of SoundCellar John’s absolute favourites).

Mark has released many albums under his own name, ranging from large orchestral works (e.g. 2019’s ‘Days On Earth’ is another of John’s favourites), to smaller ensembles and duos such as his 2019 ‘renaissance’ album ‘Salvator Mundi’ with organist Roger Mayer and his work with pianist Huw Warren.

“From Loose Tubes to Polar Bear and beyond, Lockheart’s capacity to be ahead of the jazz curve is undeniable. In this new band his combination of lyrical economy and harmonic creativity has found three improvisatory soulmates who clearly know how to make the most of his compositions in their own terms” Jazzwise magazine

Mark’s new ensemble Dreamers includes a long overdue return to SoundCellar of Elliot Galvin on keys, along with Tom Herbert on bass and an even longer overdue return of Dave Smith on drums. Elliot is well known to jazz enthusiasts as a member of Laura Jurd’s Dinosaur, for his work with Marius Neset and Binker Golding, and for his own fine albums. Tom is probably best known as an original member of Acoustic Ladyland, as well as Mercury Music Prize nominated bands Polar Bear and The Invisible. Dave has played with many top artists, such as Donny McCaslin, Eddie Henderson, Iain Ballamy and Seth Lakeman. He was also a member of Cloudmaker’s Trio (who played SoundCellar in 2012) and he toured the world as a member of Robert Plant’s band for 6 years.

“Built from the past, but creating vivid potentials for the future, Dreamers is the stuff all good jazz is made of” Jazzwise ****

“The sound of surprise is still with us” BBC Music Magazine ****