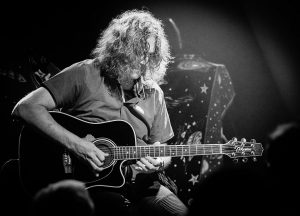 If you missed this amazing session on 7th February, we are now offering tickets for the recording of the evening, which will be available to watch until 6th April 2021.

Purchase a ticket here before the 29th March and you will be emailed a link, normally within minutes, that allow you to watch immediately.

This very special In Our Own Space – Music and Conversation performance by one of the world’s leading musicians. TIM MOTZER, comes to us from his home in Philadelphia PA, USA.

His film/TV credits include the hit HBO series True Blood as well as Miami Vice, a major motion picture directed by Michael Mann. As an in-demand, solo live composer/improviser in the world of modern dance, Tim co-creates alongside master choreographers at Princeton University and the University of the Arts. He also has a longstanding collaboration with legendary choreographer Manfred Fischbeck, as part of Group Motion Dance Company. For the past 20 years, Tim has brought his dynamic, eclectic array of musical projects together under his own 1k Recordings imprint, which has over 40 releases and counting. He composes, records, and produces his own solo and collaborative work, along with projects for other artists. To listen/buy Tim’s work on 1k Recordings please visit: 1krecordings.bandcamp.com For additional info on Tim, visit: www.timmotzer.com

Covid-19 times haven’t stopped Tim’s creativity – in fact he has released no fewer than three solo albums since the pandemic stopped us all in our tracks less than a year ago! You really don’t want to miss In Our Own Space: Music and Conversation with TIM MOTZER