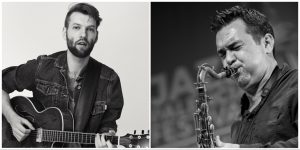 We are delighted to welcome back two great musicians who have graced SoundCellar’s stage in the past. Saxophonist BRANDON ALLEN, who first played for us in 2012 and again last year, together with guitarist NICK COSTLEY-WHITE, who played for us in 2018, will perform as a special duo in our latest Soundcellar presents: In Our Own Space – Music and Conversation evening.

Originally from Perth, Western Australia, BRANDON relocated to London in 2000. Since arriving in the UK, he has worked with many varied artists and groups/ensembles as a ‘go to’ saxophonist. Brandon is also busy as a session musician, composer and arranger for commercial music and films. His distinctive sound has been featured on film soundtracks including “Alfie”(2004) and “The Look of Love” (2013)

Brandon has toured all over the world, has even played in front of the Queen, and is currently a professor at The Guildhall School of Music and Drama.

“Brandon Allen is arguably the most exciting tenor player in Britain today. His phrasing is unashamedly emotional, soaked in the blues tradition.” Tony Hall (JAZZWISE)

NICK is one of the most in demand guitarists on the UK jazz scene, renowned for a deep understanding of the jazz tradition and repertoire, alongside a virtuosic technique and progressive approach to improvising. Like Brandon, Nick has performed with some of the most renowned jazz musicians in the country, including Stan Sulzmann, Lewis Wright, Steve Fishwick and with SoundCellar visitors Gareth Lockrane, Martin Speake, Jeff Williams and Asaf Sirkis.

Nick’s debut album “Detour Ahead” was released in July 2018 to critical acclaim:
“Costley-White proves both his virtuosity and ability to write subtle and engaging tunes” (All About Jazz).
He has also contributed to over a dozen studio albums as a sideman with a variety of jazz groups, including with the highly rated Snowpoet.

Upon graduating from the Guildhall School of Music and Drama in 2011, Nick was awarded the Yamaha Scholarship for Outstanding Jazz Musicians.

“One of the brightest stars on the British jazz scene, elegant and impressive” The Jazz Mann

Don’t miss Soundcellar presents: In Our Own Space – Music and Conversation with Brandon Allen and Nick Costley-White