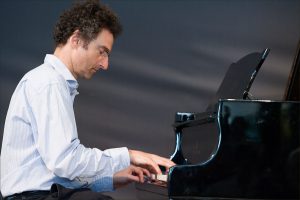 Cape Town born pianist and composer Philip Clouts’ South African roots have inspired a voyage of discovery that has led to him soaking up the joyful passion of Caribbean calypso, the bluesy melodies of middle eastern praise songs, the exuberant sway of Cuban dance music and the tuneful essence of Gospel while honouring jazz heroes including Bill Evans and Keith Jarrett.

The Philip Clouts Quartet has been a major focus of his composing and playing, and the latest album ‘Umoya,’ is titled from the Zulu word for ‘life force’. Philip’s career has included playing at Ronnie Scott’s, Birmingham Symphony Hall and the Glastonbury Festival. His music has been played on BBC’s Jamie Cullum Show, and Jazz FM has praised it, saying “it has a very infectious feel-good quality.”

In this solo setting Philip will be presenting his work in an intimate context, highlighting the wide variety of moods in the music. He’ll then take part in an increasingly popular part of these events – the post-performance Q & A session. Having first played at SoundCellar back in 2011, we are very pleased to be presenting Philip as our next SoundCellar presents: In Our Own Space – Music and Conversation artist.