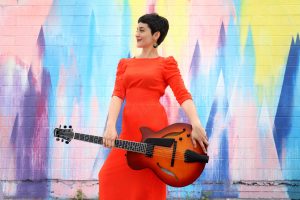 We have an extremely special In Our Own Space – Music and Conversation event for you on Friday 23rd April, when we present Chilean star CAMILA MEZA live from Guatemala (although her home is in the USA).  Camila is not only a superb singer-songwriter, but is also a fabulous guitarist and we are very excited to be presenting her in this solo livestream setting. This event forms part of the ‘Bounceback Online Jazz mini-Fest’, being run in partnership with Jazz South, SoundStorm and Lighthouse Studio Jazz.

Throughout the mid to late ‘noughties’, Camila built an enormous reputation in her home city of Santiago for her ability to combine influences such as jazz guitarists George Benson and Pat Metheny, alongside South American music and folk.  In 2007 she released her debut album ‘Skylark’ (Stateside).

In addition to guesting as vocalist on a number of other artists’ albums, Camila has so far released five albums under her own name.  Her fourth ‘Traces’, was released on Sunnyside Records in 2016, with which she won two Independent Music Awards for Best Adult Contemporary Album and Best Latin Song (“Para Volar”).

Camila sings in Spanish, Portugese and English and directs her own jazz octet, The Nectar Orchestra – leading to a lush sound perfectly captured on her most recent album release ‘Ámbar’ (2019 on major label Sony Masterworks).

She has performed at prestigious jazz festivals such as Jazzahead in 2017, North Sea Jazz in 2019 (where SoundCellar’s John F saw her perform a fabulous set with the Metropole Orkestre, alongside SoundCellar legend Becca Stevens and the phenomenal Lizz Wright), and at Snarky Puppy’s GroundUp Festival just before lockdown in Feb 2020.

Downbeat has named Camila as one of the ‘Rising Stars’ of jazz, and high profile writers have had extremely positive things to say about her, such as:

“an appealing combination of lightness and depth […], that sings with a bright, clear voice against the agile uproar of a world-class band.” Nate Chinen: The New York Times

“Ámbar is indescribably artistically delicious. It is artistically unique and aesthetically beautiful” All About Jazz

“…she casts a spell with an arresting amalgam of Latin American, jazz, and chamber-pop influences” Jazz Times

With such a pedigree, we think you’ll agree it’s essential you don’t miss In Our Own Space: Music and Conversation with CAMILA MEZA on Friday 23rd April @ 8.15pm GMT 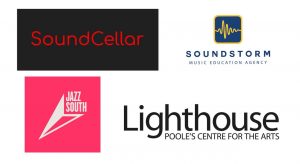