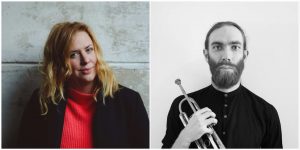 We have another high quality duo for our In Our Own Space – Music and Conversation series, when we present REBECCA NASH (piano) and NICK WALTERS (trumpet, electronics). Rebecca has played twice previously at SoundCellar in other ensembles and now brings us her own first rate material, along with some of Nick’s fabulous compositions, to this evening’s performance.

Nick and Rebecca have a long working history which reaches back over the last ten years.

Nick played a key role in the title track for Rebecca’s album, Peaceful King (released 2019), masterminding the electronic elements of that music, and in turn Rebecca plays piano for Nick’s bands The Paradox Ensemble and The Nick Walters Quintet. The pair have developed a symbiotic musical relationship built around friendship and a musical respect, combining forces to create a dynamic new sound world.

Between the two of them, they have in recent years notched up several critically acclaimed releases on major British jazz labels including Whirlwind Recordings, 22a Records, and EFPI Records. Earlier this year, Nick established his own label, D.O.T. Records – a strong new force on the jazz scene.

They are looking forward to bringing their new collaboration to SoundCellar, where they will perform their Jazz South Radar Commission, The Sanctuary, which explores the concept of ley-lines and their effect on the natural world around them. The pair will also be playing some stripped-back material from Implicate Order, Nick’s newly released Paradox Ensemble album, as well as music from Peaceful King, and an earlier Paradox album The Awakening.

“Nash, and her superb band are at the vanguard of innovative and compelling new music.” (Downbeat Magazine)

Make sure you join us for SoundCellar Presents: In Our Own Space: Music and Conversation with REBECCA NASH and NICK WALTERS