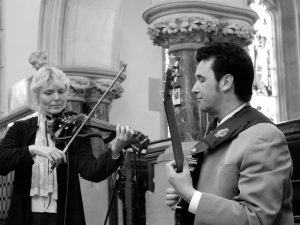 For our next In Our Own Space – Music and Conversation performance, we are really pleased after a number of intervening years, to be able to present the virtual return of the fabulous Europa String Choir, coming to us from their home in Kirchdorf am Inn, Germany.

One-time residents here in Dorset, original members Cathy Stevens (6 string violectra) and Udo Dzierzanowski (guitar) are returning to SoundCellar via the internet, having been the second ever band to play in the cellar, way back in May 2010!

Cathy Stevens studied violin and viola at the Yehudi Menuhin School and the Royal Academy of Music. In 1975, she became a professional orchestral player, working with the London Sinfonietta and Fires of London, among others.

In 1989, Cathy began working with arguably Dorset’s most famous musician Robert Fripp for his Guitar Craft courses. There she met guitarist Udo Dzierzanowski and in 1991 Cathy and Udo formed a viola-and-guitar duo called The Annexe, performing both self-penned and classical music, which toured with fellow Guitar Craft graduates California Guitar Trio.

The quartet intermittently toured Europe and the USA over the next four years. Europa String Choir’s second album Lemon Crash was released in 2000 and a third album of improvisations from the Lemon Crash sessions and tour, Marching Ants was subsequently released in 2003 on Burning Shed.

In 2013, Cathy and Udo relocated the Europa String Choir from Dorset to Germany and in 2014 released their first album in eleven years, The Eye of the Beholder, a series of live improvisations available as a download through Bandcamp.

Cathy and Udo also played and recorded throughout the mid – 2000s, as part of the improvisational collective Zaum, led by the late Steve Harris, and while living here in Dorset regularly performed with other SoundCellar ‘alumni’ Jon Lloyd, Karen Wimhurst, Adrian Newton and indeed our own Rob Palmer.

Celebrating their 30th anniversary in 2021, Europa String Choir have released their entire back catalogue on Bandcamp and are returning to active performing and recording as a duo. Their instrumental music has evolved over the years to develop quite a distinctive acoustic/electric sound. Cathy & Udo playfully explore the boundaries between improvisation and composition, seeking out the space between silence & sound, often working from silence, crossing over musical genres in a unique way.

The group are excited to announce that work is currently ongoing towards releasing the first new Europa String Choir music since 2000, much of which will be presented here at this SoundCellar performance!

Make sure you join us for SoundCellar Presents: In Our Own Space: Music and Conversation with the Europa String Choir on Thurs 8th July.