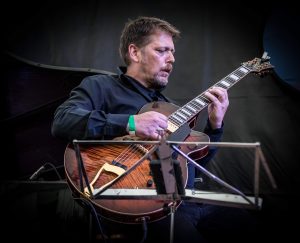 Next up for our In Our Own Space – Music and Conversation series, we present the virtual return to SoundCellar of guitarist NIGEL PRICE. Nigel has played at SoundCellar on a number of occasions and we are now really looking forward to a solo performance from him, as well as to his post-gig ‘chat’, where we are pretty certain he will be almost as entertaining as he’ll be with his guitar playing!

Nigel is one of the most highly regarded and in demand guitarists on the UK jazz scene today.  He spent three years with UK funk legends – the James Taylor Quartet, recording 5 albums with them, and was voted No.1 in the 2016 British Jazz Awards for “best guitarist”.  He is also a regular performer at Ronnie Scott’s, where he’s played around 600 times to date!

Nigel’s blend of flowing bebop lines and deep blues feeling has made him popular with jazz, blues and funk audiences across the World. He has played on more than 50 albums by other artists and as a leader, Nigel will release his 10th album in early June, a couple of weeks before this SoundCellar performance.

Called Wes Reimagined, the album features his organ trio, including SoundCellar favourite Ross Stanley and a number of guest musicians including Nigel’s regular guest saxophonist Vasilis Xenopoulos (who has played with him on two occasions at the cellar). The album is a collection of Wes Montgomery’s timeless tunes, respectfully reinterpreted. Nigel comments, “I haven’t tried to reinvent the wheel in any way – it’s just a kind of “what if?””. The great man’s tunes are played in the same spirit but with a little look at what might have been!

“For me, this is how jazz should be; communicative and inclusive. Jazz performed this way feels like a gift…” ‘Wes Reimagined’ review London Jazz News

“Nigel Price is probably the most dynamic and gifted guitarist on the British jazz scene today….”  All About Jazz

Make sure you join us for SoundCellar Presents: In Our Own Space: Music and Conversation with NIGEL PRICE