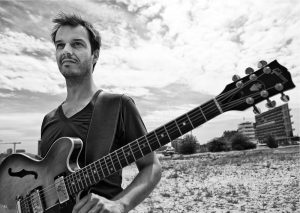 If you missed this amazing session we are now offering it as a recording, which will be available until 28th February 2021.

Purchase a ticket from here and you will be emailed a link, normally within minutes, that allow you to watch immediately.

One of the most highly lauded gigs in SoundCellar’s history was the evening in 2018 when we were fortunate enough to be able to present Dutch guitar maestro JESSE VAN RULLER in a trio with Irish drum star David Lyttle and SoundCellar favourite bass player Conor Chaplin. We were  therefore thrilled to be able to have Jesse return (virtually) to SoundCellar and perform for us in a special Sunday edition of our In Our Own Space: Music and Conversation series.

Three guitar icons have had this to say about Jesse:
‘Jesse is one of the best young players I’ve ever heard’ (Pat Metheny)
‘Most expressive player, he really touched me on a personal level’ (Jim Hall)
‘Jesse van Ruller is a marvellous guitar player’ (John Scofield)