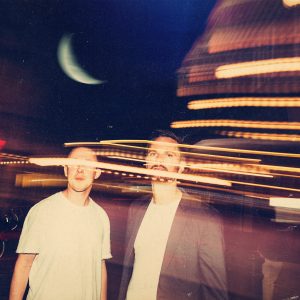 Acclaimed as composers as well as instrumentalists, sharing multiple awards, an Ivor Novello nomination and seven albums as leaders between them, Ant Law and Alex Hitchcock return to SoundCellar, following their appearance at The Grasshopper in 2022 (in Matt Ridley’s band).

Guitarist Ant and saxophonist Alex have each brought their own ensembles to SoundCellar in previous years, but this is the first time they come to us as co-leaders, in support of their highly lauded album Same Moon in the Same World, released in November 2022.

Same Moon in the Same World is an ambitious collaboration between two musicians who have created a startlingly vivid and mature soundworld, brought to life by a carefully-curated selection of the world’s most distinctive and virtuosic improvisors.  Recorded in 2020 and 2021 across multiple continents – bridging the gap between London and Tel-Aviv, and Amsterdam and New York, it is testament to both Ant’s and Alex’s burgeoning reputations, that they were able to enlist the services of some of the finest musicians on the planet!

For their SoundCellar performance, Ant and Alex have a fabulous rhythm section, comprising of two further top class international musicians: Conor Chaplin hardly needs any introduction to our SoundCellar audiences, as he is quite simply one of the UK’s most in-demand bassists, and Grammy nominated Cuban drummer extraordinaire Ernesto Simpson (Arturo Sandoval, Richard Bona, Candy Dulfer & many others).

“What a gamechanger he can be”
(Ant Law) The Guardian