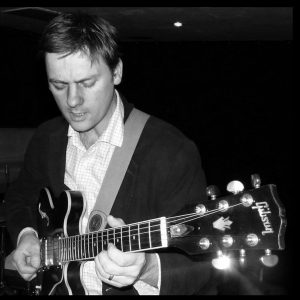 ALL SEATS FOR THIS GIG SOLD OUT! REMAINING TICKETS ARE STANDING ONLY. PLEASE JUST TURN UP AND PAY ON THE DOOR.
Plenty of tickets for the LIVESTREAM. Get one here: https://www.eventbrite.co.uk/e/livestream-mike-outram-trio-tickets-218851329217

We couldn’t think of a better musician to kick off our brand new (hopefully no lockdowns) year of gigs in 2022, than the amazing guitarist MIKE OUTRAM with his trio. Mike has played many times at SoundCellar since his debut for us in 2011, featuring in different ensembles with amazing artists such as Roz Harding, Karen Street, Theo Travis, Pete Callard, Martin Speake, Tony Woods, and Paul & Jeremy Stacey. No matter who he has been playing with, his mastery of the guitar has always been a major talking point after the gig, with our discerning audiences!

Mike has worked and recorded with such luminaries as Steven Wilson, Carleen Anderson, Tim Garland, Asaf Sirkis, Gareth Lockrane, Robert Fripp, Hadrien Feraud, Julian Siegel, Nikki Iles, Laura Rossi & many others. He’s taught for over 20 years at The Royal Academy of Music, The Guildhall School of Music & Drama, and Trinity Laban, London, and now leads an online community of over 700 guitarists who study jazz guitar & improvisation at ElectricCampfire.com A glance at his discography shows that he has contributed to over 100 recordings, illustrating that he is one of the most in-demand guitarists on the music scene.

Mike’s first visit back in 2011 was with a trio and we are extremely excited to welcome him back in that format again. The MIKE OUTRAM TRIO this time around not only includes the return of top drummer ANDY TRIM, with his deep local connections to the area, but also features another of our absolute favourite SoundCellar regular artists, the phenomenal keyboard maestro ROSS STANLEY. Ross has played with so many of the best musicians around today, not least as a member of Trish Clowes’ My Iris band and of the Nigel Price Organ Trio, but also as a core musician alongside such names as Will Vinson, Dennis Rollins, Guy Barker, Michael Janisch, Joel Frahm, Liane Carroll, Stan Sulzman, Steve Arguelles, John Parricelli, Bobby Wellins, Clark Tracey, Trevor Horn, Jim Mullen, Steve Howe and Jacqui Dankworth, amongst others.

Kick off the New Year with this fabulous trio, as a great introduction to what looks like being a bumper year of fantastic bands and artists that we already have lined up well into autumn 2022.

This gig will be held at The Avocet (formerly The Cow), next to Parkstone Railway Station. Please note the 20:00 (8 pm) start time for the forseeable future.

Entry is £13 + booking fee in advance through the below link, or £15 cash on the door