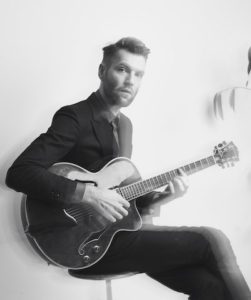 NICK COSTLEY-WHITE is one of the most in-demand guitarists on the UK jazz scene, renowned for a deep understanding of the jazz tradition and repertoire, alongside a virtuosic technique and progressive approach to improvising. Nick first brought his band to SoundCellar in 2018, as well as performing (with Brandon Allen) in one of our very successful ‘In Our Own Space’ livestreams during lockdown in 2020. He is now bringing a stellar band for our delectation – the NCW 4 featuring Ivo Neame.

“A masterclass in the under appreciated art of playing beautiful, laid back swing” Jazzwise

Nick has also contributed to over a dozen studio albums as a sideman with a variety of jazz groups including the highly acclaimed Snowpoet.  Upon graduating from the Guildhall School of Music and Drama in 2011, Nick was awarded the Yamaha Scholarship for Outstanding Jazz Musicians.

IVO NEAME hardly needs an introduction to SoundCellar regulars, having played for us on a number of occasions, plus playing one of our ‘In Our Own Space’ livestreams in 2020 (with Ant Law).

Ivo is an award-winning multi-instrumentalist, composer and arranger. In addition to leading his own bands, he is a vital cog in several of European jazz’s most forward-looking groups including Phronesis and the Marius Neset Quintet. He studied at the Royal Academy of Music and is now an Associate of that revered body. Since completing his studies there in 2003, he has performed and recorded with highly esteemed musicians at home and abroad such as David Binney, Kenny Wheeler and Hermeto Pascoal. He has also played on more than 50 albums as a sideman and a leader.

Ivo has a whole host of awards and honours to his name, a snapshot of which include:

Completing the Quartet are yet more of the very best musicians working in the jazz world today.  One of SoundCellar’s absolute favourite bass players CONOR CHAPLIN, is simply the most in-demand bassist around and the final superstar in the band is percussionist / drummer (and erstwhile top vibes player) LEWIS WRIGHT.

This really is a band you shouldn’t miss the chance to see here in Poole.

This gig will be held at The Avocet (formerly The Cow), next to Parkstone Railway Station. Please note the 20:00 (8 pm) start time for the forseeable future

Entry is £13 + booking fee in advance through the below link, or £15 cash on the door