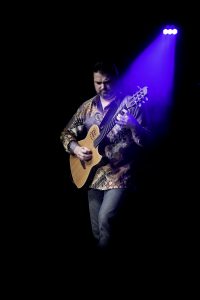 Having played at SoundCellar in a number of different line ups since his debut for us in 2011, Nicolas Meier returns with his acclaimed NICOLAS MEIER WORLD GROUP.

Originally hailing from Switzerland, UK-based musician Nicolas has carved out a reputation as one of the world’s most original and uniquely talented guitarists. Drawing from a love of Turkish, Eastern & Middle Eastern music, Flamenco, Tango and more – all mixed with jazz – his versatility and musical fluency extends well beyond that (…so much so, that his considerable talents drew the attention of rock guitar legend, Jeff Beck, who made Nicolas a mainstay in The Jeff Beck Group – carrying him on two world tours during the course of the last few years.) Nicolas is certainly prolific, having released many albums both under his own name in different configurations and in numerous collaborations – a quick count on his website makes the new album “Magnificent” by this line-up, his 27th available to purchase! ​The Nicolas Meier World Group’s 2019 release “Peaceful” received lots of critical acclaim and the band followed that up with their World Group “Live” release the following year. Having made a lasting impression on the likes of the great Bill Bruford, (the aforementioned) Jeff Beck and Steve Vai, Nicolas Meier is unquestionably one of today’s most well-rounded, ambitious and masterful up-and-coming talents on guitar. In a career which is still unfolding as it blossoms, Nicolas has already rubbed shoulders with a truly staggering, diverse array of some of contemporary music’s most brilliant artists. Stay tuned … this is one star that is still on the rise! “Meier composed a set of attractive pieces for Peaceful, full of strong melodies and diverse rhythms. Despite the eclectic range of stylistic influences, the program sounds cohesive, a tribute to the band’s excellent musicianship. Meier is a brilliant guitarist, and is joined by three equally strong players. Percussionist Demi Garcia deserves special mention. While he takes no solos, his empathetic support and mastery of so many different styles are major factors in the album’s success.” All About Jazz, Mark Sullivan “The choir of guitars he employs lend him an almost unique voice, especially as he favours fretless instruments that allow him to explore micro-tones, blends, slurs and sudden runs that dazzle and delight.” Jazzwise Magazine Richard Jones: violin Demi Garcia: percussion Kevin Glasgow: bass Nicolas Meier: acoustic fretted and fretless guitars and glissentar Entry is £13 + booking fee in advance through the below link, or £15 cash on the door Share this event