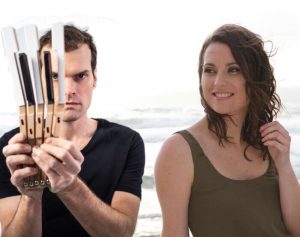 Having first played at SoundCellar with her band in 2015, we are delighted to be able to welcome the wonderful vocalist NOEMI NUTI back to perform for our In Our Own Space: Music & Conversation series, in a duo with acclaimed pianist ANDREW McCORMACK.

Born and raised in New York from Italian descent, Noemi Nuti is a jazz vocalist and composer residing in London. She studied classical harp at Brunel University and jazz improvisation at Trinity College of Music, graduating with an MA in Jazz Performance in 2012.

Noemi has been active since 2008 starting with joining the Tomorrow’s Warriors ‘Jazz Alive’ project, has performed with NYJO, the London Vocal Project and was lead singer for samba band Rhythms of the City. In 2015, she released her debut album ‘Nice to Meet You’ and received wide critical acclaim and extensive airplay, including being A listed on Jazz FM.

She has recently released her second album ‘Venus Eye’ in March 2020 to wide critical acclaim and has been selected for Serious’ Take Five artist development scheme.

“…a lot of joy, and a range of many emotions, shining through this very accomplished new release.” (Jazz Journal)

Noemi has performed in many important venues including, Ronnie Scott’s, Islington Assembly Hall, 606 Jazz Club (and SoundCellar of course) in the UK and further afield in the U.S.A., Europe and Brazil. She is regular performer at the London Jazz Festival.

Andrew McCormack is an acclaimed musician in his own right. In addition to receiving high praise for his first two albums ‘Telescope’ and ‘First Light’ and for his band Graviton (including Noemi), Andrew’s latest release in 2020 ‘Solo’ has been widely praised across the board:

“(..piano)…which McCormack uses to perform a wide-ranging repertoire of engaging and beautifully-played music” (All About Jazz)

“This really is a very fine achievement. I’m now very impatient to hear McCormack in concert again; meanwhile, Solo is a disc to treasure” (Jazz Journal)

“Andrew McCormack: ‘Solo’ review – prepare to be seduced” (The Guardian)

We are sure you won’t want to miss this special duo performance for In Our Own Space: Music and Conversation with NOEMI NUTI and ANDREW McCORMACK