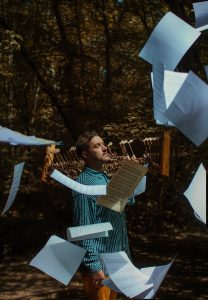 Having played at SoundCellar with other ensembles, we are really pleased to now be able to present RICK SIMPSON ‘solo’ as one of our In Our Own Space – Music and Conversation artists, not least because he will be bringing a taste of Radiohead with him (as explained below!)

Rick is based in London playing a wide variety of music, and leads his own group playing original jazz music. He is a regular performer at Ronnie Scotts, the 606 Jazz Club, Pizza Express Dean Street, The Vortex, The Bull’s Head, and has appeared at larger UK venues such as the Royal Festival Hall and the Purcell Room.

In 2008 Rick won a Yamaha Scholarship Prize for Outstanding Jazz Musicians. A recording of Rick’s band was put on the front cover of Jazzwise Magazine.

Since graduating from the Guildhall School of Music and Drama in 2008 he has performed with musicians such as Christian Scott, Eric Harland, Joe Sanders, Ernesto Simpson, Earl Burness Travis, Stan Sulzmann and with SoundCellar favourites Michael Janisch, Martin Speake, Jeff Williams, Kristian Borring, Leo Richardson and Andre Canniere. In addition, Rick plays in the ensembles of Jay Phelps, Rory Simmons, Alice Leggett and Riley Stone-Lonergan, amongst others.

Having released two previous albums as leader involving many of SoundCellar’s most popular musicians (pretty much every one of them having played at the cellar at some point), in October 2020, Rick released another album involving Soundcellar ‘stars’, that has taken the jazz world by storm! Released on the 20th Anniversary of the release of Radiohead’s genre-busting album ‘Kid A’, Rick presented Everything All Of The Time: Kid A Revisited on our favourite record label, Whirlwind Records.

The album is described as a typically idiosyncratic project: a re-framing of Radiohead’s Kid A album, featuring ten original arrangements of the source material played by an all-star band of like-minded musical mavericks.

The project was created to mark the 20th anniversary of the original album’s release, as part of a series of sell-out shows curated by Simpson at London’s Vortex club featuring non-jazz records rearranged with an improvisational focus. The original show was such a success, drawing in listeners from beyond the club’s regular audience, that Simpson re-assembled the band in the studio and recorded the entire album in a single afternoon session “I think the time pressure contributed to the performances. It’s really punchy and to the point, but a lot happens – it captures the energy so well”. There’s a wealth of detail to discover, and surprises at every turn.

Here are just some of the press accolades:

“Simpson’s energy on this recording is infectious… The arrangements are terrific, with the two frontline saxes bringing a welcome edge to the session.” ★★★★ UK Vibe

“Simpson and his band produce not simply a heartfelt homage but a genuinely stirring set of tunes in their own right.” Jazz Views

Rick will be playing many of the tunes from the album for us, so it really goes without saying that you don’t want to miss In Our Own Space: Music and Conversation with RICK SIMPSON

All tickets purchased will also allow exclusive access to a video recording of the performance for one month afterwards. This will provide those who join us on the night with the opportunity to relive the whole event and also give those who cannot make it on the night, the chance to watch it all later. A link to the video will be emailed to you around 2-3 days after the performance.