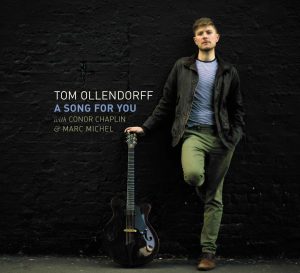 For our next In Our Own Space – Music and Conversation event we have expanded our livestream horizons beyond our usual solo/duo format and present the return to SoundCellar of a fabulous trio led by super guitarist TOM OLLENDORFF.

Tom first wowed us early in 2019 when he and SoundCellar’s favourite bass player Conor Chaplin played for us with star drummer Ari Hoenig.  Tom then returned later in the year with his own trio featuring Conor again, along with drummer Marc Michel and wowed us all over again. As all our regulars will know, Conor is one of the most in demand bassists around – many will perhaps best know him as a member of Laura Jurd’s Dinosaur. Marc has become established as one of Europe’s top drummers, having played with superstars such as Mike Moreno, Kurt Rosenwinkel and SoundCellar legend Jesse van Ruller.

In May 2021, the Barcelona-based jazz label Fresh Sounds Records will release A Song For You, Tom’s debut album. Since being awarded the Yamaha scholarship for outstanding jazz musicianship in 2015, Tom has honed his craft on the UK and European jazz circuits to become a rising star and much sought-after player, lending his compelling skills to a range of high profile projects and performing with respected artists and ensembles including Geoff Simkins, Dave Cliff, Huw Warren, James Maddren, Jeff Williams, Or Baraket and Bill McHenry.

On A Song For You, Tom’s distinctive style and flair for both composition and improvisation shine through in droves, teaming up with this dynamic band of Marc on drums and Conor on bass. This longstanding trio have an innate understanding of each other’s musical idiosyncrasies, which becomes very evident during the improvisational passages on the album. The result is a series of engaging and hypnotic grooves, interweaving reoccurring themes and subtly allowing enough space for each individual to showcase their undeniable talent.

With both his excellent trio and the aforementioned artists, Tom has appeared at venues and festivals in France, China, Slovakia, Switzerland, Holland and of course the UK, including leading jazz venues such as The Vortex, Ronnie Scott’s and of course SoundCellar. The band plan to take the live circuit by storm as the world emerges from this period of lockdown.

Speaking of the new album, Tom comments: “Fresh Sound New Talent have released some of my favourite jazz records, and it is a thrill for me to be joining the long list of incredible artists who are associated with the label. I really hope you enjoy the record.”

A Song For You is an outstanding album, sonically illustrating all of the qualities needed by a young and passionate jazz band to elevate to the next level of their journey – the proof is in the listening!

“Tom Ollendorff is one of the world’s finest guitarists. His music is complex yet rooted in melody and feeling” Gilad Hekselman, Jazz Guitarist

“I really enjoy the playing and writing of young guitarist Tom Ollendorff, definitely one to watch and listen out for” Helen Mayhew, Jazz FM

Make sure you join us for SoundCellar Presents: In Our Own Space: Music and Conversation with TOM OLLENDORFF and his trio.