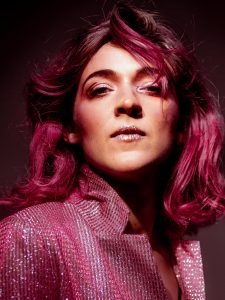 We are absolutely thrilled to present the return of BECCA STEVENS to SoundCellar, for a very special In Our Own Space: Music and Conversation evening. Still fondly remembered as one of our most iconic visitors, Becca first played at SoundCellar with her Becca Stevens Band back in 2015. Now following her recent 2021 Grammy nomination, we are excited to be presenting her in a solo performance from her home in New York. Make sure you set aside Sunday 23rd May @ 8.15pm (UK time) in your diaries!

Hailing from Winston Salem in North Carolina, now living in Brooklyn, Becca studied at the prestigious The New School in New York. Known for her ability to infuse her music with elements of pop, jazz, indie-rock and traditional Appalachian folk music, she has established herself as one of the leading singers, songwriters and multi-instrumentalists in the world.

Having played at distinguished venues such as New York’s Carnegie Hall, Tokyo’s Cotton Club, the LA Troubadour, Paris Olympia, Newport Jazz Festival, North Sea Jazz Festival, Monterey Jazz Festival and other high-profile places, here in the UK she has appeared at The Barbican, Shakespeare’s Globe Theatre, Ronnie Scott’s, London’s Troubadour, as well as Poole’s SoundCellar of course! For well over a decade, Becca has been in great demand for her distinctive, exquisite vocals, contributing to recordings by Brad Mehldau, Esperanza Spalding, José James, Billy Childs, Wolfgang Muthspiel, Snarky Puppy, 2011 SoundCellar legend Michael Olatuja and many others.

As a world class musician and songwriter, she has written for and collaborated with artists as diverse as David Crosby, Jacob Collier, Vince Mendoza, Taylor Eigsti, Ambrose Akinmusire, Tal Wilkenfeld, Laura Mvula, Elan Mehler, 2017 SoundCellar visitor Oli Rockberger and recent In Our Own Space star Jesse van Ruller, as well as many other top quality artists.

As well as having her own band, Becca is a key member of The Lighthouse Band, a quartet of superstars comprising of herself, Michael League, Michelle Willis and David Crosby! Their 2018 album ‘Here If You Listen’ is regarded as a classic, with a number of the most memorable songs on the album written by Becca.

Becca currently appears on over 60 albums and since the 2008 release of her first album ‘Tea Bye Sea’, she has now released 5 albums under her own name (or as Becca Stevens Band). Her most recent album ‘Wonderbloom’, which she not only wrote and performed on alongside over 40 invited guest musicians, but also co-produced and co-engineered, came out just as the pandemic struck in March 2020. It has nevertheless garnered widespread critical acclaim and recently received a Grammy nomination for one of its songs ‘Slow Burn’, in the category of “Best Arrangement, Instrumental and Vocals”.

“Stevens has a beautifully nuanced vocal style, a delicate yet strongly assured delivery rooted in an open, broad, range which is very much her own, with the mildest of echoes of one of her heroines, Joni Mitchell, that also carries through to her guitar work, and with whose Help Me she encored.” London Jazz News, November 2017, Ronnie Scott’s performance

“Stevens fashions a sound all her own with airy, brook-clear songs equally touched by jazz sophistication and homespun folk charm.” Time Out, New York

“Fully satiating. That is the least I can say about a Becca Stevens listening experience. Her songwriting, voice, and lyrics are like a cool bubbling brook freshening the brine of all the music you’ve ever heard.” Esperanza Spalding

“Stevens is effortlessly charming in her stage demeanor and lights up like a firefly in performance. She is a treasure.” Kurt Elling for JazzTimes

“She’s someone who everybody, in my generation at least, looks up to. She’s really a genius – I don’t like using that word too much, she really has tapped into something in a deep way.” Ambrose Akinmusire

We are sure you will agree this edition of SoundCellar presents: In Our Own Space – Music and Conversation with BECCA STEVENS will be an evening you simply cannot afford to miss.

All tickets purchased will also allow exclusive access to a video recording of the zoom performance for one month afterwards. This will provide those who join us on the night with the opportunity to relive the whole event and also give those who cannot make it on the night, the chance to watch it all later. A link to the video will be emailed around 2-3 days after the performance.