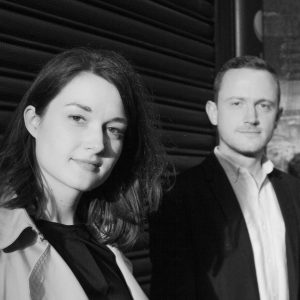 Having first played at SoundCellar in 2012, we are very excited to be welcoming back the acclaimed composer, saxophonist and band leader TRISH CLOWES, together with her regular band colleague ROSS STANLEY, who is one of the UK’s most ‘in demand’ keyboard players and has therefore played many times at the cellar during our 10+ years.
Trish is rightly lauded as one of the UK’s top saxophonists, however she has also become firmly established as a first class composer across a wide range of musical styles, having received numerous commissions by the BBC, London Sinfonietta and others. In recognition of her talents, she has a number of prestigious nominations and awards to her name. She has written pieces for not only sax in a variety of settings, but also for solo violin, solo double bass, choir, string quartet, brass quintet and for full orchestra. For example, two new pieces by Trish have emerged from lockdown, one for solo cello inspired by images and sounds along the East Neuk of Fife coastline, which received its world premiere in August and an intriguing interpretation of a Vivaldi piece that will be premiered this autumn.
Trish has been an Associate of the Royal Academy of Music since 2013 and recently completed her PhD. She has been curating the music project Emulsion since 2012, creating opportunities for contemporary musicians and composers to have their music seen and heard.
In addition to featuring on many recordings by top artists, she has with her own bands Tangent and more recently My Iris (featuring Ross), toured extensively and released six albums as leader and composer, including a recently released live My Iris recording from a show last year.
As with her previous releases, her most recent studio My Iris album Ninety Degrees Gravity (Basho Records) has received many ‘rave’ reviews since its release last year, such as:

“covers vast emotional territory with verve and vim”
4* from Mojo Magazine
“a definite contender for album of the year. Each track is so beautifully structured and so well played, that the whole set amply repays many repeated listens”
Chris Baber, JazzViews
“exhilarating and darkly funky”
4* from John Fordham, The Guardian
“awesome foursome… impeccable”
4* from Dave Gelly, The Observer

Ross is also highly regarded as a top musician. Especially in demand for his creative and expressive piano and organ playing, he has played and performed with many of the UK’s top musicians, including Liane Carroll, Stan Sulzman, Steve Arguelles, John Parricelli, Bobby Wellins, Clark Tracey and Jacqui Dankworth and he is a key member of a number of bands including My Iris. He has also played with SoundCellar visitors Michael Janisch, Will Vinson and Jim Mullen, and his own visits to SoundCellar have included playing here with bands led by Dylan Howe, Paul Booth, Mike Outram, Ed Jones and Nigel Price.

Don’t miss Trish and Ross bringing us this exclusive performance from their ‘space’, directly into our (your) ‘space’ as part of our ongoing SoundCellar presents: In Our Own Space – Music and Conversation series.