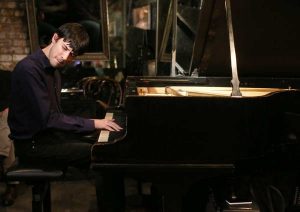 In Our Own Space – Music and Conversation with GLENN ZALESKI – Thurs 24th Sept Considering his first ever gig in the UK was at SoundCellar with Phil Donkin, Ben Wendel and James Maddren back in 2015, we are particularly pleased to welcome back one of the most in-demand pianists on the New York City jazz scene, GLENN ZALESKI, to perform in one of our SoundCellar presents: In Our Own Space – Music and Conversation events. Originally from Boylston, MA and now a resident of New York, Glenn has made a name for himself playing with the likes of Ravi Coltrane, Lage Lund and SoundCellar 2019 visitor Ari Hoenig. In 2011, he was a semi-finalist in the Thelonious Monk International Jazz Piano Competition, as well as a finalist for the 2011 APA Cole Porter Fellowship in Jazz. He attended the Brubeck Institute Fellowship program in Stockton, CA from 2005-2007, and then finished his undergraduate studies at The New School in 2009. Glenn has released two popular albums with his long-standing co-led trio, Stranahan/Zaleski/Rosato: “Limitless” (Capri, 2013) and “Anticipation” (Capri, 2011), as well as a duo record with his brother, saxophonist Mark Zaleski (“Duet Suite”, 2010). The trio more recently released “Live at Jazz Standard” (Capri 2019), recorded from a live set at the legendary NYC club. One year earlier in 2018, “Solo Vol. 1” was released – his first solo piano album, as well as the first release from his own label Stark Terrace Music. His debut album in his own name “My Ideal” was released in March 2015 (Sunnyside Records), and received critical acclaim: Downbeat Magazine named it “sublime” and Jazz Times called it “…an engaging set by a talent worth watching”. In 2017 he released his second album for Sunnyside Records, “Fellowship”, prompting All About Jazz to note: “Glenn Zaleski has quickly become one of the most important pianists of his generation and it’s easy to see why.” His new quintet album, “The Question”, has just been released this July, again on Sunnyside Records and is already receiving reviews such as: “With a genuine aptitude to extract beauty and joy from his playing, Zaleski is a modern pianist who never loses touch with the jazz tradition” Jazz Trail We strongly recommend you catch Glenn performing in another of our Trans-Atlantic events, straight from his home in New York City, as one of our SoundCellar presents: In Our Own Space – Music and Conversation artists. All tickets purchased will also allow exclusive access to a video recording of the performance for one month afterwards. This will provide those who join us on the night with the opportunity to relive the whole event and also give those who cannot make it on the night, the chance to watch it all later. Note: There is an additional 80p admin charge by Eventbrite Share this event