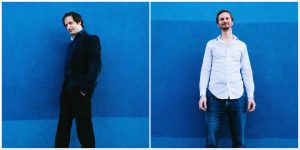 In Our Own Space – Music and Conversation with IVO NEAME and ANT LAW – Thurs 17th Sept
We are extremely pleased to be able to welcome back one of SoundCellar’s more frequent and popular visitors, award-winning pianist and composer IVO NEAME, together with another returning SoundCellar favourite, guitarist ANT LAW, for this unique duo performance as part of our SoundCellar presents: In Our Own Space – Music and Conversation series.
IVO is an award-winning multi-instrumentalist, composer and arranger. In addition to leading his own bands, he is a vital cog in several of European jazz’s most forward-looking groups including Phronesis and the Marius Neset Quintet. He studied at the Royal Academy of Music and is now an Associate of that revered body. Since completing his studies there in 2003, he has performed and recorded with highly esteemed musicians at home and abroad such as David Binney, Kenny Wheeler and Hermeto Pascoal. He has also played on more than 50 albums as a sideman and a leader.

His fifth album under his own name “Moksha”, released on Edition Records in 2018, has received rave reviews and earlier this year he released the album “Multiverse” as a duo with yet another SoundCellar favourite, percussionist and vibes player Jim Hart, again on Edition Records.

(Multiverse is) “…very cool, daring and technically dazzling. I’ve played it many times already, and every time I hear something new and beautiful.” London Jazz News

Described as “an innovator” by the Guardian, ANT lives in London and leads his own group in which Ivo plays piano. In 2013 Ant’s debut ‘Entanglement’ was released to great acclaim, followed by ‘Zero Sum World’ (2015) and ‘Life I Know’ in 2018. This release was very warmly received by the press, receiving 5 star reviews, making numerous “best of 2018″ lists, receiving airplay in the UK, Europe, Australia, and hundreds of thousands of plays (and counting) on Spotify. It is being described as “career-defining”. The next chapter has just begun with “The Sleeper Wakes” for Edition Records which was released on July 24th. This will be the first time some of this music has been performed since the release.

“What a game changer Law can be” The Guardian

Ant plays in Tim Garland’s band with Jason Rebello & Asaf Sirkis, featuring on albums ‘Songs To The North Sky’, ‘Return To The Fire’ & ‘ONE’ which was shortlisted for a Grammy and won the Jazzwise Best Album award. Ant is the “L” in Trio HLK who record/tour with Dame Evelyn Glennie. He has worked with other notables Cory Henry, Thomas Gould and is featured from time to time in “Total Guitar”, “Guitar Techniques” & “Guitarist” magazines. In the latter he recently made a list of “10 Astounding Virtuosos”. Ant has an interest in Physics, which he read as a scholar at Edinburgh University.

Don’t miss Ivo and Ant bringing us this exclusive performance from their ‘space’, directly into our (your) ‘space’ as part of our ongoing SoundCellar presents: In Our Own Space – Music and Conversation series.

Note: There is an additional 90p admin charge by Eventbrite