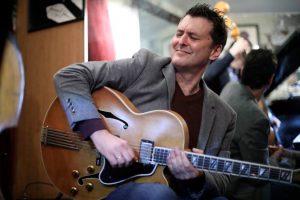 We are really pleased to be able to present Peter Mazza for one of our SoundCellar presents: In Our Own Space performances. Peter is a jazz guitarist, composer, educator and jazz venue-Music Director born and raised in New York City. He earned degrees from The Manhattan School of Music and The Julliard School, and was a Thelonius Monk Competition semi-finalist. He began performing in NYC over 25 years ago with some of the most outstanding musicians of his generation including Chris Potter, Joel Frahm, Rick Margitza, ‪Roy Hargrove‬, ‪Brad Mehldau‬, ‪Christian McBride‬, Greg Hutchinson, among others, and has performed with jazz legends like ‪Wynton Marsalis‬ and Jimmy McGriff.‬‬‬‬‬‬‬‬‬‬‬‬‬‬‬‬

His groups have performed at Birdland, Dizzy’s Club, Mezzrow, Smalls, The ‪Cornelia Street Café‬ and ‪the 55 Bar‬ in New York City, and at jazz clubs throughout the USA, in Argentina Japan and Israel. He retains a ‪Sunday night‬ residency at New York’s most respected venue for guitar-led trios, the Bar Next Door at ‪La Lanterna‬ in Greenwich Village, which is now in its 20th successful year. ‬‬‬‬‬‬‬‬‬‬‬‬‬‬‬

Peter’s harmonically rich and virtuosic solo playing and performance videos on YouTube and Facebook and a vibrant Skype teaching studio, have earned him a substantial following from around the world. His most recent CD called Circles and Lines (2014 Urban Flower Records) features his guitar/piano/bass trio performing his intricate and fresh arrangements of standards by the Jazz and American Songbook Composers.

Peter is an in-demand travelling guest artist and clinician who has been invited to appear at Universities and Music colleges all over the USA. He was due to play in the UK this autumn but those plans have been postponed of course. Instead for the time being, Peter is running an online masterclass via the London Jazz Guitar Society on 23rd Aug, followed by our special In Our Own Space – Music and Conversation performance on 27th Aug.

“It’s one thing to perform compositions that go through time modulations, meter changes, and reharmonizations; but, to do those things and make it seem effortless and of the highest musicality is a rarity…”

Jazz Inside magazine said about another recent Peter Mazza performance-

“A guitarist with an instantly recognizable voice, his original compositions are joyous whirlwinds of thematic expression, rich with emotion and personality. Both vulnerable and commanding, he puts it all on the line and goes for it, the experience is thrilling…”

Note: There is an additional 80p admin charge by Eventbrite