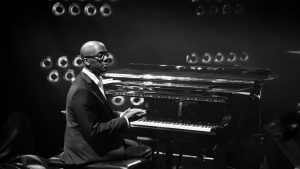 Over his nearly 30 years entrenched in the art of music, Robert has released 10 albums of his own projects, participated in over 100 projects as a sideman, has performed in 40 countries and is achieving a growing reputation as an inspirational educator.

His latest album ‘The Rainbow Mountain/Can We Care’ is his 10th and first live solo album. This was recorded at the Jazz Cafe (London) in a performance sharing the bill with Vijay Iyer. A continuous improvisation – finished off with the song – hence the double title. A review from UKVibe stated: ‘‘The Rainbow Mountain / Can We Care’ is an intimate, bold and thoroughly enjoyable listen and the perfect display of Robert Mitchell’s genius.” In 2014, his first large scale work Invocation, was successfully performed by the Grammy winning Bournemouth Symphony Chorus, Goldsmith Big String and students from Avonbourne and Harewood schools, at St Peters Church (Bournemouth) and the Queen Elizabeth Hall (London).

In 2019 Robert worked as MD on a BBC4 television tribute to the great 60s TV show – Jazz 625 Live: For One Night Only (performing with Joshua Redman and Jacqui Dankworth and featuring Gregory Porter). It won Best Music Programme at the 2020 Broadcast Awards. He was among the group of nominees for the 2020 Hamlyn Award for Composition, who all then became recipients of the award due to the pandemic.

Robert is set to complete commissions for London Sinfonietta and JazzSouth in 2020. Robert is proud to be a Steinway Artist since 2009. He is now a Jazz Piano Professor at Guildhall School of Music & Drama. He sits on three Ivors Academy Panels: Equality, Diversity and Inclusion Steering Committee, Jazz, and Women In Music.

“The astonishing Robert Mitchell, familiar as the pianist and MD for the recent ‘BBC Four celebrates Jazz 625 For One Night Only’, took the keyboard apart in every sense of the word. He uses both hands and sometimes cross-hands with equal force to build solos of unbelievable depth and complexity. Urged on by his fellow players and the awe-struck audience, his playing became ever more audacious as the evening progressed.” thejazzmann.com

Having performed at SoundCellar with his groups Panacea in 2013 and Epiphany 3 in 2018, in addition to the 2014 world premiere of Invocation at St Peter’s Church described above, we are extremely pleased to be able to continue our strong local connections with Robert, by presenting him as one of our In Our Own Space: Music and Conversation artists